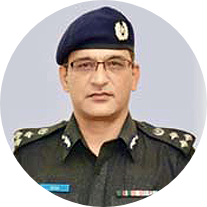 
A police officer from Azad Kashmir has been chosen for a senior position in the United Nations peacekeeping mission in Darfur,Sudan The position was advertised by the UN in October last year, and every member country had nominated four to six officers for the slot. “Mr. Irfan Kashfi has been found as the most suitable candidate for the appointment on secondment for the post of FPU Coordinator in the African Union/UN Hybrid Operation in Darfur,” read a letter written by the UN Secretariat to Pakistan’s Permanent Mission.


Mr. Kashfi is currently serving as the deputy inspector general of the AJK Reserves/Rangers Police. He is likely to join his new assignment within a month. Having earned a Master of Public Administration degree from the Virtual University of Pakistan, Mr. Kashfi joined the police service in 2003.


He has served on a number of command and staff appointments, including police chief of three districts and principal staff officer to the prime minister before his promotion in August 2015.


In 2012-13, he had also served on secondment with the UN Mission in Liberia and was awarded the UN Police Medal and Commendation Certificate for his contributions in the service of international peace.

A police officer from Azad Kashmir has been chosen UN....

List of past IGP's of AJK police from 1947 till now